You Are Here: Sabbioneta - The measuring shape of an ideal city

Sabbioneta - The measuring shape of an ideal city 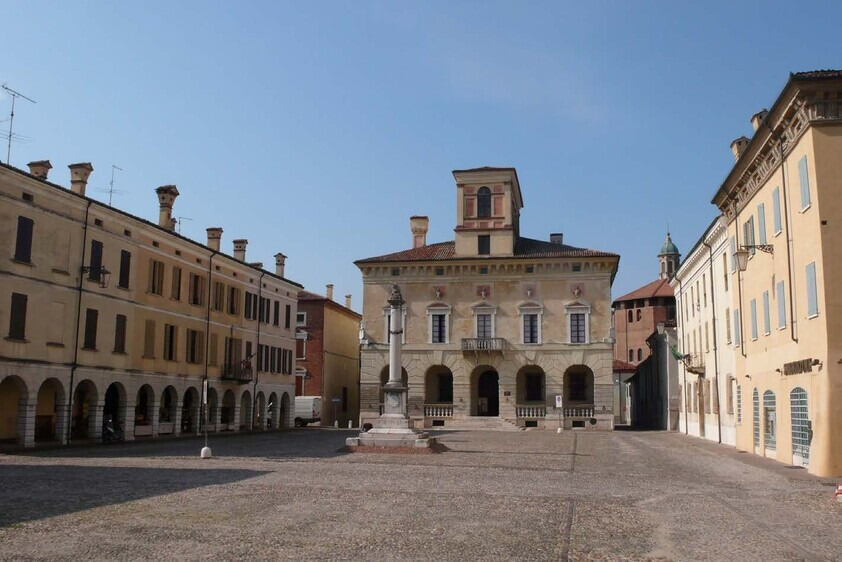 Founded in 1556, Sabbioneta, the residence of Vespasiano Gonzagas (1532-1591), is considered to be the first completely newly-founded city in the Renaissance. In addition, the city is regarded to be the very prototype of the ideal city of the era, since its founder willed it to manifestly express the contemporary conceptions of state and society by the spatial structure of streets and squares, in its outline, ground plan and urban design. Despite the fact that its form and purpose were pre-conceived down to the last detail, the city does not present the structured image of a planned city at all.
Instead, the outline of the rampart forms an irregular hexagon and the inside is a broken pattern of streets intersecting at right angles and at first sight bearing no directional relationship to the outline.
There have been repeated attempts to identify a construction shape for the irregular outline, which is subject to the clear laws of geometry and thus necessarily structured. However, all reconstruction attempts operate with circular geometry and the derived compass inscriptions.
For ground plan configurations of single buildings, circle geometries play a very minor role in the history of architecture and they are practically irrelevant in urban architecture. This is mainly because geometric operations with the compass on the drawing board are indeed very easy to do, but they present almost insurmountable difficulties when practiced on the building site, where ropes tied to a peg in the center of the circle must take the place of the compass. The bigger the object to be staked out, the greater the no longer acceptable inaccuracies become.
Because of that, instead of measuring shapes based on circular geometry, there has been a tradition of orthogonal or square stake-outs since antiquity. These are worked inwards from the outside and originate from an orthogonal „Campus Initialis“, an enveloping shape which surrounds the entire construction site. From this outer square or rectangle, streets, insulae and single constructions are measured on the inside. In addition, the method has the advantage that the accuracy of the measurements increases when progressing from the outside to inside - or from large to small, while it declines with all processes working from a center point. 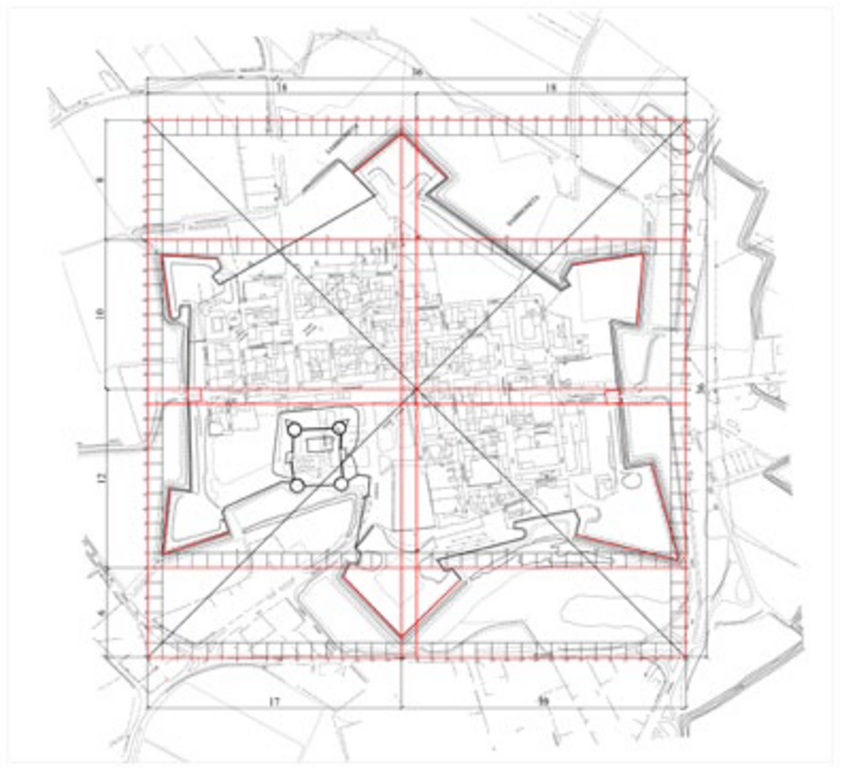 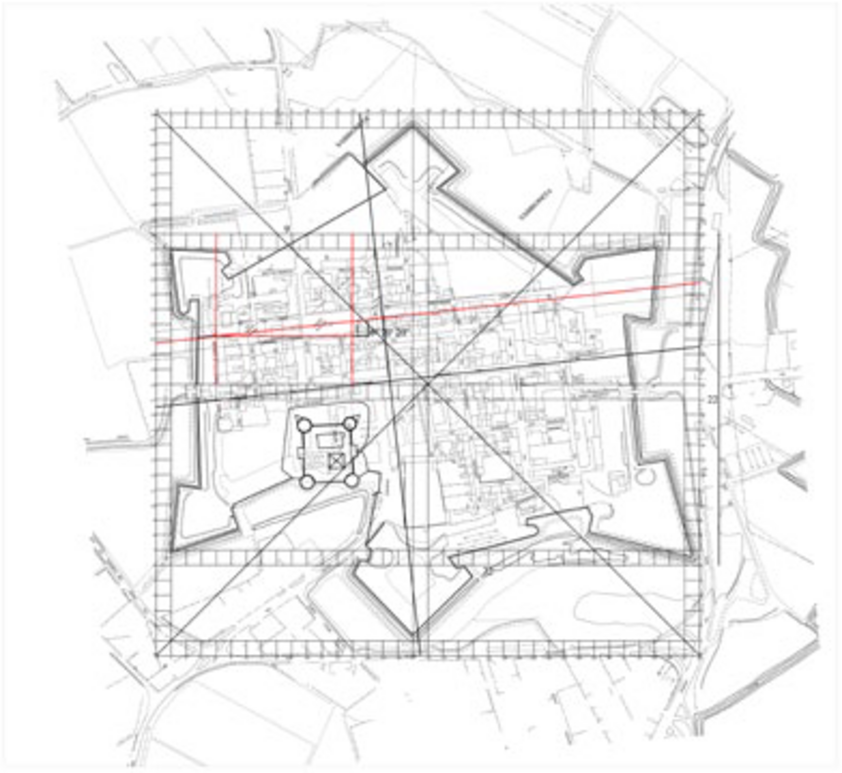 Therefore, it seemed obvious to analyze also the ground plan of the ideal city Sabbioneta with the help of this Roman technique. In fact, this path led to success: Sabbioneta’s ground plan is inscribed into a square, whose corners point exactly towards the four compass points, so that the diagonals run exactly from north to south and from west to east. The tips of the bastions are set precisely on this square enveloping shape, whose sides are thus divided into sections of 16:18 and 8:20:6. The length of these sections is 40x40 braccia di Sabbioneta, the cubit of 0.493m which Vespasiano Gonzaga introduced on the basis of the Roman foot. This humanistic artificial measuring unit was at a 5:3 ratio with the old Roman foot (0.296m). Overall, the exterior measuring shape of the directed square divides into a grid of 34x34 squares of 40x40 braccia and with 16:8 and 8:20:6, the further division follows the rule of the harmonic proportions of the major whole tone (8:9) as well as the sixth (5:3), the fourth (4:3) and the major third (5:4).

This grid also determines the location of all major buildings, the city gates, the Palazzo Ducale, the churches, the theater and the gallery. However, most importantly, it defines the directions of the main axes of all streets and squares, which were determined before the start of the constructions on the inside by setting up massive ashlars at the corners of the insulae and individual monumental structures. These corner stones –called „cippi“– are also modeled on the practice of Roman urban planning, in which the corners of the building blocks were arranged before dividing the individual contract sections. They were never changed since the legal titles of the real estate were based on them.

The main axes of the internal structure of the city ground plan of Sabbioneta are not aligned with the measuring shape of 34x34 squares but inclined to the grid of the Campus Initialis at a ratio of 1:9. Since the outer square is oriented after the four compass points, the inclination of the axis away from the astronomical north-south direction can be exactly determined, it is 308,46° (degrees). This is the south azimuth of the sunrise on the 6th of December. Julian Style, considering the shifts before the Gregorian calendar reform and the elevation of the horizon by the earth fill of the ramparts and/or the constructions on the axis of the Palazzo Ducale.

The 6th of December is the birthday of the city’s founder, Vespasiano Gonzaga, who was born on this day in 1531 at Fondi (Latium) “shortly after sunrise”. Apart from the outer enveloping shape, the second geometrical classification system is also oriented astronomically, but this time according to the sun azimuth on the ruler’s birthday.
Thus, the internal structure of the streets, squares and insulae with its main axes of today’s Via Vespasiano Gonzaga, which crosses the entire city, and the central axis of the Palazzo Ducale - from the balcony across the fore court - was directed towards the Dies Natalis of the city’s founder. The birthday orientation of the urban main axis is also an ancient Roman practice in the planning and founding of cities. A significant number of the city foundations in imperial times and an even bigger part of the systematically structured Roman camps was aligned with the longer of the two main axes, the Decumanus, directed towards the location of sunrise on the birthday of the founding emperor.

Both the geometry of the enveloping shape and the just as precisely engineered internal structure of the urban plan of Sabbioneta are thus the result of a renaissance-like assimilation of ancient Roman urban planning practices, as the Latin Agrimensores have passed them on in Gromat literature and also as they are well known from remaining monuments. Therefore, an extremely complex geometry is concealed behind the apparent irregularity of the ideal city of Sabbioneta, which is not immediately obvious but still forms the basis for the entire construction of the outline and the ground plan of the city. It is based on a very precise knowledge of the theory and practice of ancient Roman urban planning, it sovereignly adopts the stately gestures of imperial foundations, and it also requires a highly developed astronomical, trigonometrical and surveying expertise at the highest level of the humanities and natural sciences of the time.

During so far four measurement campaigns, the entire city outline with the bastions as well as the road system with the corner stones of the insulae was measured tachymetrically. In addition, the astronomically exact north direction was determined by the meridian opening of the sun and, finally, in thousands of individual measurements between the Zippi and on the buildings themselves, the measuring unit of braccio di Sabbioneta was defined exact to the millimeter.

The geometric code of the precisely engineered matrix of outline and ground plan shape of the ideal city Sabbioneta is decoded, the significance of the gestures of imperial leadership and of the spatial order of city and its surroundings can be deduced easily from the ancient Roman traditions, which are adopted and updated.
Now, it is essential to identify and examine the ways in which this thinking was conveyed, how the single aspects of this realm of perception affected the actual architectural design of individual buildings of Sabbioneta. Precise building surveys of the entire courtly architecture of Sabbionata must first lay the foundations for this purpose. This task will dominate the next few years. Specifically, seven more building research campaigns are planned each with two weeks work onsite. The funding of these campaigns is also secured by the German Research Foundation and the Gerda Henkel Foundation.

The building and art historical significance of the discovery of this urban development matrix of Sabbioneta is mainly based on the fact that, because a highly artificial, geometrically precisely constructed shape has been established as the source of the seemingly randomness of the city ground plan, the mannerist qualitites of this prototypical ideal Renaissance city can now be precisely denominated. One of the central aesthetic categories of Mannerism – „Sprezzatura“, the apparent randomness of the artificial and artistically constructed, as introduced by Castiglione in the first book of „Cortegiano“ – can now not only be proved, as it has been many times, in architecture, painting, sculpture or cabaret, but also in the comprehensive gesamtkunstwerk of the ideal city, which only is created by the interaction of art and science. Behind the as it were organically grown “beautiful irregularity” of Sabbioneta, which has obviously become historic is a precisely calculated construction made with great technical efforts. Nevertheless, it intentionally conceals this knowledge, in order to comply with the mannerist principle of „dissimulando il sapere“ and to demonstrate that “that must be considered as the highest of art what does not seem to be art at all”.