You Are Here: Ghazni 2013 - Capital of Islamic Culture 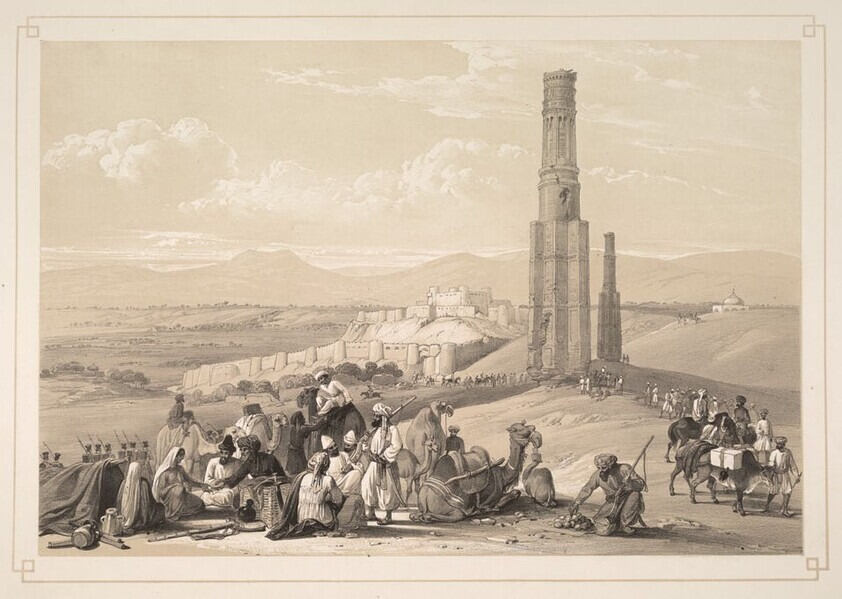 Copyright: © RWTHsbg Historical view of Ghazni with citadel and both minarets

In 2013 the historic Afghan city of Ghazni will be one of three “Capitals of Islamic Culture”. This programme, which had been launched by the Islamic Educational, Scientific and Cultural Organisation (ISESCO) in 2005, is comparable to its European predecessor and example. Yet it is spreading from Africa to Asia including a large variety not only of different cultures, but also of different economies and political systems. Obviously, the challenge for Ghazni and Afghanistan to host such an event is enormous. Yet at the same time Ghazni represents an intriguing example for the cultural wealth of Islam as well as its confrontation with and integration into older cultural realms.
Today Ghazni (also Ghazna, Ghaznin or Ghuznee) is the capital of a province in central-east Afghanistan, accommodating approximately 140,000 inhabitants. Situated some 140 km south of Kabul at a height of 2,200 m, it is a prominent station on the Ring Road that connects all Ghazni 2013 Capital of Islamic Culture major Afghan cities. At the same time Ghazni used to be an important and prosperous junction on the commercial route between Iran and India. Because of its strategic significant location between Kabul and Kandahar, however, the city also experienced several severe attacks during regional and interregional warfare. Numerous buildings and monuments including the impressive city wall have been damaged or destroyed, rebuild and renovated, and then destroyed again. In addition natural weathering caused by the extreme climate aggravated the decay of the building substance.
The cities fame results from its time as the capital of the Ghaznawid Empire that lasted from the 960s until the last half of the 12th century. Mahmood of Ghazni (971- 1030), the most prominent ruler of the dynasty, spread his rule from the current Azerbaijan over Iran, Afghanistan, Pakistan and parts of north India including major parts of today’s Kyrgyzstan, Tajikistan, Turkmenistan, and Uzbekistan. His strength resulted from a combination of Muslim belief, Persian tradition, and Turkish military skills that won him an extensive and stable realm. Ghazni became the unrivalled metropolis of his empire, in which the Sultan’s court attracted artists, writers, and scientists. Among them were the poet Ferdowsi (c.940- 1020), whose works played an important role in re-establishing the Persian language in the Age of Islam, as well as the scholar and polymath al-Biruni (973-1048), who is considered the medieval “father of geodesy”.
Art and architecture flourished at the Ghaznavid court, also because the many raids of the rulers to North India filled their coffers and allowed for a generous support of the artists and architects. When the richness of the empire was based on its conquests, however, all military campaigns were described as religious war against the Hindus and Buddhists. Today only two richly decorated minarets built of burnt bricks stem from this period. With their delicate ornamentation they are exemplary for the Ghaznavidian architecture and art, though they only partially outlasted the large destructions through warfare and decay. The palace of Masood III for instance lasted only in ruins, while the Italian archaeologists found a marble covered inner courtyard of 50 by 31 metres that was surrounded by splendid Iwans, large halls that faced the open area. The outside walls of the palace were covered with Persian inscriptions.

City wall and citadel from the northeast

City wall and citadel from the northeast

Destruction at one of the main towers

During the first documentation campaign

During the second documentation campaign

Nevertheless, archaeological remains prove that Ghazni’s historic traces go way beyond the Islamic Age. In the 6th century BC Cyrus the Great conquered the area and thus incorporated the market-town Ghazni into the Persian Empire. Then it became part of the Hellenistic impact to Central Asia that started with Alexander the Great (356- 323 BC) and continued under the Seleucid, Graeco- Bactrian, and Indo-Greek rule until the beginning of the Common Era. Around that time Western tradition and Buddhist belief, which had been brought into the region by the Maurya emperor Ashoka (274–232 BC), merged into the specific Gandhara art that we know from the giant Buddha statues in the Bamiyan valley. Especially in the Kushan Empire of the 1st and 2nd century CE Buddhism flourished and archaeological as well as written evidence proves that Ghazni was a thriving Buddhist centre even during the time that Sassanids and Hephtalits fought for the supremacy in the region (c.425-560).
This comprehensive history of the city made the Afghan government consider the nomination “Ghazni 2013 – Capital of Islamic Culture” as a token for presenting the importance of all its cultural layers and the importance of tradition, understanding, and exchange within Islam and to other cultural realms. Given the political situation in Afghanistan and the ongoing decay as well as the destruction of large parts of the city, at last some 10 years ago during the fight against the Taliban, this is evidently an ambitious aim. Largely unknown especially to the West is, however, the multi-ethnic composition of the Afghan population. Thus as period of celebration, as it is offered with the ISESCO programme and as it has been suggested to the Afghan government by Prof. Dr. Michael Jansen from the RWTH Aachen Department History of Urbanization in 2009, is a great chance for the inner stabilization of the region by having the local population get in contact with fellow countrymen from other provinces to celebrate.
Within this framework also the restoration of the famous but heavily destroyed old city wall of Ghazni, a symbol for urban freedom and local pride, is a major component. With a total length of some 2.5 km, encompassing the city and the elevated fortress, until today the walls give impressive evidence to the historic significance of the city also from a far distance. However, to succeed in the restoration of the Ghazni city walls what is currently lacking is both, the scientific expertise to plan the restoration activity as well as the local personnel to realize the required works. Still, exactly the assignment of local workers to such a project allows for a new capacity building in mud brick construction and an even deeper reintroduction of the people of Ghazni to their proper cultural heritage also as an initiative “Culture for Peace”.
Thus since 2010 the Department History of Urbanization is executing a comprehensive restoration and capacity building programme in Ghazni, with substantial financial support from the German Ministry of Foreign Affairs and in close collaboration with the Afghan Ministries for Information and Culture as well as Urban Development. When the management and external expertise is imported to Afghanistan from Germany, the UK, and Oman (also by Afghan expatriates), the project is employing some four hundred local workers until the end of 2013 and thus represents a substantial and sustainable contribution to the reconstruction of the city „out of own manual and artisan energy“, that also withdraws these people from potential financial offers by the Taliban. As an activity “from Afghans for Afghans” the restoration-project is meant to give a physical contribution to a peaceful perspective for the province and the whole region.