You Are Here: Freiburg Fragments


The „Freiburg Fragments“
Over 100 years ago, at the beginning of 1906, 14 wooden crates from the Middle East reached Freiburg. The shipment contained 41 architectural fragments of the Roman Temple Ruins from Baalbek in present-day Lebanon. Otto Puchstein, Professor of Classical Archaeology from Freiburg, had directed the excavations in Baalbek from 1900 to 1904. According to the usual sharing of finds at the time, the University of Freiburg received these fragments as demonstration material for ancient building techniques and the rich architectural ornamentation of the Roman Empire. The limestone fragments convey an impression of the magnificent size of Baalbeks buildings. In addition, they are a direct illustration of the Roman stone masons’ art and impress by their precisely carved ornamentation. 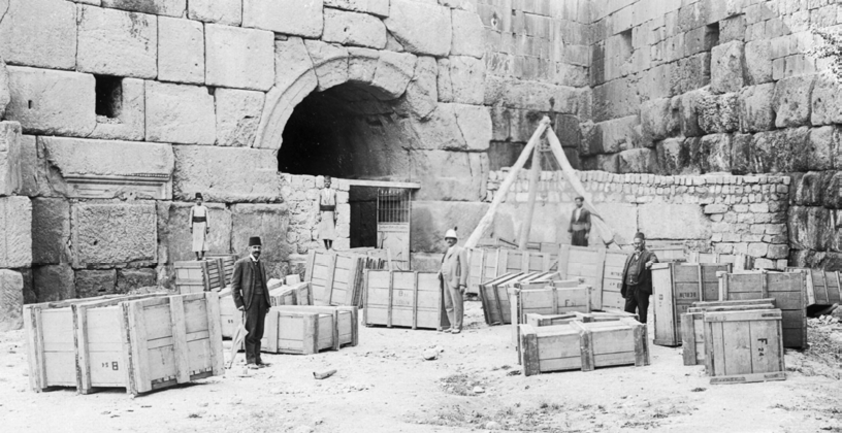 Wooden crates with architectural fragments of the Roman Temple Ruins

By the time of the Second World War, the Baalbek fragments sank into oblivion. Only in 1965, the bigger parts were joined with cement to form an architectural reconstruction in the courtyard of the Old University, where they remain until today. Further pieces of the entablature of the Altar Courtyard were exhibited in the archaeological collection of the University Library from 1988 to 2008.
Until 2005, however, most of the pieces were stored in an inadequate condition regarding their conservation. In the following, the Freiburg Baalbek Fragments were secured and documented as part of a research project. Recently, new scientific results and the relocation of the archaeological collection brought about a new presentation of these fragments. A room especially intended for this purpose was designed, realized and inaugurated in May 2011, in a cooperation of different planners, professionals and craftsmen as well as the participants of a seminar at RWTH Aachen University, Faculty of Architecture. 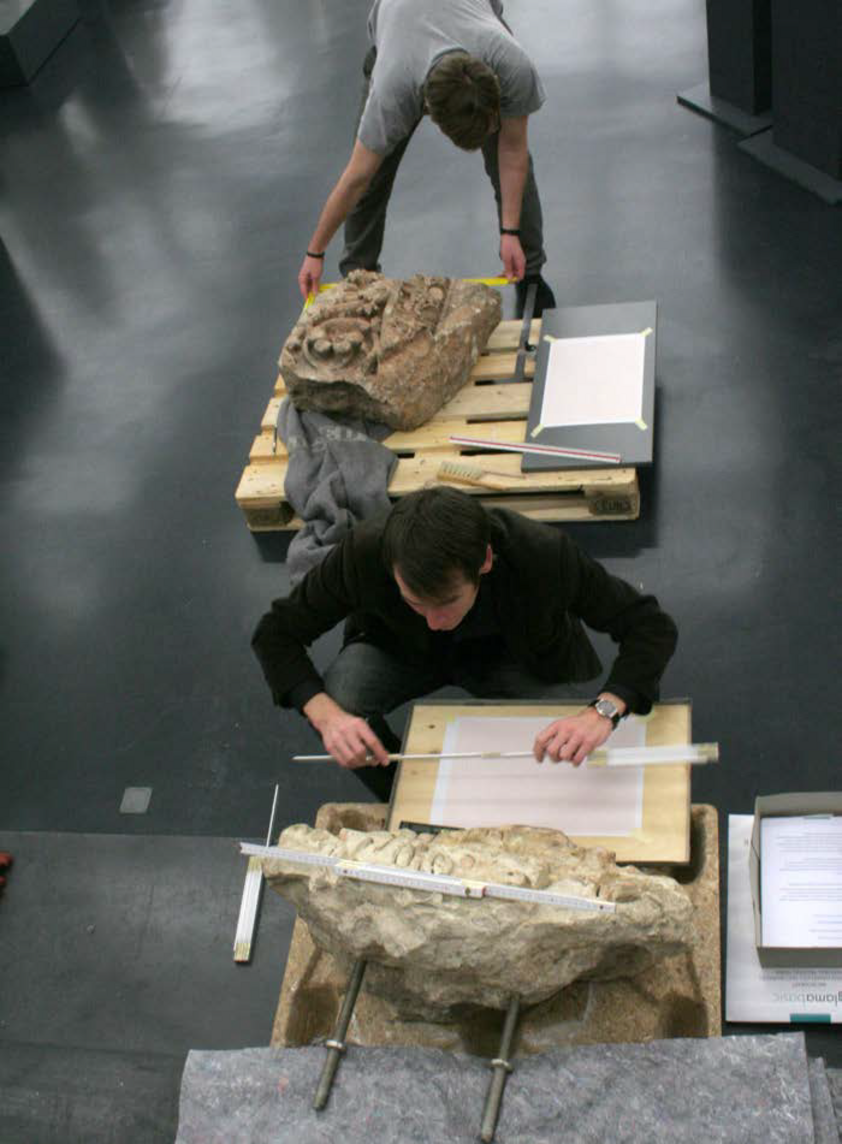 The Seminar
The seminar was held in Freiburg in March 2010, as a preparation for an excursion of the Department of Historic Building Conservation in May 2010 to the Near East and to Baalbek, the place of origin of the stones.
The seminar “Freiburg Fragments” dealt with the question of how architects with a background in architectural history and conservation could arrange a sophisticated exhibition of such valuable pieces. The participants developed concepts, which could adequately highlight the origin and the cultural context of the objects but also their special aesthetic and the sculptural skill of their makers.
During a five-day workshop in Freiburg, in direct contemplation of the place and the fragments, the participants worked on further issues from the seminar. Exemplary topics of the seminar referred to the presentation of ancient Roman building parts, the design of exhibition concepts for archaeological finds (tablets, texts), to exhibition architecture (display cases, brackets for the fragments, lighting..), to 3D modeling and virtual reconstruction of ruins and visualization, and last but not least to documentation and understanding of the fragments and their history as well as their present condition. Both, the latest scientific results from the dissertation of the seminar instructor Daniel Lohmann (“The architecture of the Jupiter Sanctuary in Baalbek”) as part of a major research project of the German Archaeological Institute and the BTU Cottbus as well as the unbiased creativity of the student participants were introduced in the work.
The workshop’s results formed the basis for further planning of the exhibition. In close and intensive cooperation with the client, the archaeologist and curator Lars Petersen, the exhibition designer Gerd Schossow as well as specialists and craftsmen, the permanent exhibition was realized within eleven months of planning and construction, and was inaugurated in May 2011.

Permanent Exhibition in the Foyer of the Collection
The exhibition consists of three parts. The center point is the „Baalbek Wall“ of 4m*5,40m. On its surface, a natural scale historic building survey serves as a basis and visual orientation for the attachment of the entablature fragments of the Altar Courtyard Peristyle. Furthermore, a hanging display case for especially elaborate small fragments is mounted on eye level. To the left of this wall, a text and picture panel gives explanations about the city of Baalbek in the past and present, such as the peculiarities of ancient Heliopolis. A digital TFT display shows impressions from the current research work in Baalbek. On the opposite side, to the right of the Baalbek Wall, a “rack” is set up, which shows further fragments in boxes, abstractly resembling the wooden crates used to ship them a century ago.
The budget for realization was limited. In cooperation with the Institutional Administration a concept was developed, which allows the successive modular expansion of the exhibition at minimal expense. Presently the “rack” displays three big fragments. The addition of six further boxes could complete the “rack” to the originally intended nine fragments in the future.

Mapping of the damages